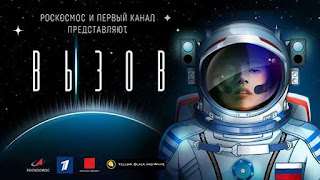 Russia’s not-too-subtle effort to upstage Tom Cruise’s plans to film the first ever feature film in Earth Orbit have taken a major step forward, with more details announced jointly by the Russian Space Agency, Roscosmos and Channel One TV, from Moscow.

Vague details released in September, have now been fleshed out, with the headline grabbing news being the decision to base the Russian movie plot around a woman, meaning that the film-makers will need to find an actress willing to fly on a Soyuz rocket in October next year.

The project which is tentatively called ‘The Challenge’ has the tag line ‘Become a star, by flying to the stars!’

Konstantin Ernst, Director General of Channel One commented, “One day Dmitry Rogozin, Director General of Roscosmos called, and this interesting project was in the launch position. Roskosmos, in fulfilling its professional duties and implementing new space programs, believed it could train two actresses as cosmonauts-researchers, one of whom would then be sent into space to shoot a feature film. Initially, we will look for professional actresses, but also women whose acting skills can allow them to compete with professional actresses.”

Details about the plot are sketchy and it is unclear how much film content will be actually be filmed in Space. Russian cosmonauts will be trained to act as camera and sound recordists on board the ISS. Rogozin is himself designated Executive Producer, whilst the producer will be Klim Shipenko, whose previous work includes the 2017 blockbuster “Salyut 7”.

Although it has not been explicitly stated, the woman selected will need to fly on the Soyuz MS-19 mission, replacing one of the three professional cosmonauts currently pencilled in to fly that mission. This in turn, will mean that one of the crew on the preceding mission Soyuz MS-18 will need to remain on the ISS until Spring 2022. This is because Russia has only six seats to the ISS available in 2021 (Soyuz MS-18 and MS-19) and needs to find a way to accommodate this unplanned ‘project’ within those available resources.

The only other crewed Russian flight planned for 2021 is the first wholly commercial Soyuz mission, arranged in conjunction with experienced spaceflight provider, Space Adventures, which will be Soyuz MS-20 and will fly in December 2021. Space Adventures are not involved in the ‘movie’ project, and the actress will not occupy one of their seats. Whilst they have not made any official comment about their future clients, the latest unofficial information emanating from Roscosmos and Space Adventures officials indicates that Soyuz MS-20 will be flown by veteran cosmonaut Alexander Misurkin, and two female Spaceflight Participants, an Austrian commercial pilot and a Japanese singer and actress.

However, the Russian movie proposal has not met with universal approval, with some Russian spaceflight commentators taking to Social Media to suggest that utilising ISS resources for a purpose not obviously connected to scientific research, or Russian national interests, may actually be illegal, and have called for transparency with regard to the underlying financial arrangements.

Returning to the question of how Roscosmos and Channel One will find their actress, an open competition was launched on the Channel One website on 3rd November, inviting both actresses, and other women, with a passion for space, to apply. Candidates are required to be aged 25 to 45, and must meet specific anthropological requirements, to ensure they can fit comfortably in a Soyuz, as well as the health, fitness and psychological requirements, typically required for any potential cosmonaut candidates. These characteristics will be tested during the selection process, which will unfold during early 2021. Finally, they have to record a screen test, reciting a specific monologue, written by Alexander Pushkin.

According to Channel One, thirty candidates will participate in a reality TV show, between January and March 2021, which will show them going through the cosmonaut selection tests at the Yuri Gagarin Cosmonaut Training Centre, with the number of contenders being progressively reduced, in line with the usual reality TV model. It’s not clear if this will involve any audience voting. Logically, passing the required health, fitness and psychological tests, should trump broader popularity.

When the leading candidate, and an understudy (back-up) are chosen, by April 2021, they will undergo three months of general spaceflight training, before completing three months of flight specific training, presumably with cosmonauts Shkaplerov and Babkin, with launch currently planned for 5th October 2021.

Speaking about the project and the selection process, Rogozin said, “In this project, it is important for us not only to demonstrate the heroism and high professionalism of cosmonauts and industry specialists. who ensure the safety of manned flights, but also to develop the methodology of accelerated preparation for spaceflight and to perform a mission on the ISS. So, this is a kind of space experiment. The actress we select will perform the functions of a cosmonaut-researcher and become a full-fledged member of the Soyuz crew.”

Although official news of Tom Cruise’s flight to the ISS, arranged through Axiom Space, and SpaceX is still awaited, the currently projected timeline would put Cruise, producer Doug Liman and an unnamed actress on ISS, a few weeks after the Russian actress has departed.